With the opening keynote speech at WWDC just hours away, a placeholder in the iOS app store for an app called “Files” by Apple was noticed by Steven Toughton-Smith.

With Apple expected to announce the newest version of iOS, as happens annually at WWDC, this presents an interesting and encouraging development. Apple has long held out on including a way to manage files on iOS devices, despite calls by many users for years to include it. A file structure has long been included in Android. 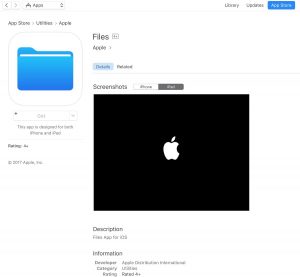 With the iPad Pro offering tablet / notebook hybrid experience and with users expectations of iOS devices in general becoming greater each year, such an inclusion would make a lot of sense. While at this point, this is an unconfirmed rumour, the fact that a placeholder appeared in the iOS app store does add a lot a weight to it.

Time will tell, however, with just a few more hours to go we will all know soon.